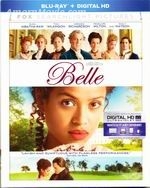 Gugu Mbatha-Raw delivers "a breakthrough performance" (Mark Olsen, Los Angeles Times) in this "gorgeous must-see film" (Cori Murray, Essence) that's based on an extraordinary true story. Although Dido Elizabeth Belle (Mbatha-Raw), an 18th century English woman of mixed race, is raised in privilege by her aristocratic great-uncle (Tom Wilkinson) and his wife (Emily Watson), she is denied a proper social standing because of her skin color. But when Dido falls in love with a young idealist lawyer (Sam Reid) who aspires to create positive change, she finds herself caught between two worlds. With everything to lose, she struggles to convince those around her - and the society in which she lives - to overcome their biases and accept her fully. Only if she succeeds will she find true happiness in this exquisite masterpiece that also stars Miranda Richardson, Penelope Wilton and Matthew Goode.

- Belle: The Story
- Gugu Mbatha-Raw Breakout Role
- The Power of Belle
- From Painting to Screen The History Behind the Painting
- Still Gallery