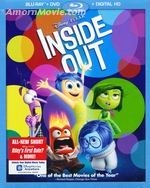 From the imaginative minds of Disney Pixar comes a major "emotion" picture beyond compare. Experience the hilarious and heartwarming film Peter Travers of Rolling Stone calls "a burst of pure imagination."

Do you ever look at someone and wonder what's going on inside their head? Disney Pixar's Inside Out takes a rollicking journey into the mind to find the answer. Based in Headquarters, the control center of 11-year-old Riley's mind, five emotions are hard at work, led by lighthearted optimist Joy. She strives to make sure Riley stays happy as she operates alongside fellow emotions Fear, Anger, Disgust and Sadness. It's "an instant classic," raves Richard Roeper, Chicago Sun-Times. Experience it like never before on Disney Blu-ray

- All-New Short: Riley's First Date?
- Lava, Short Film
- Story of the Story:
Join Peter Doctor & the story crew as they walkyou through the process of finding this story.
- Paths to Pixar: The Women of ""Inside Out"":
Wonderful stories from the female cast & crew
- Mixed Emotions:
Follow the filmmakers as they personify the emotions
- Mapping the Mind:
Explore the fascinating workings of our minds
- Our Dads, The Filmmakers:
- The making of the film from their daughters' point of view
- Into the Unknown: The Sound of ""Inside Out"":
Hear what the inside of our mind sounds like
- The misunderstood Art of Animation Film Editing:
Join the editor for an introduction to cutting animation

Electric.Neon.lamp : How to Disappoint Your Parents (CD ...