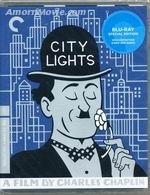 City Lights, the most cherished film by Charlie Chaplin, is also his ultimate Little Tramp chronicle. The writer-director-star achieved new levels of grace, in both physical comedy and dramatic poignancy, with this silent tale of a lovable vagrant falling for a young blind woman who sells flowers on the street (a magical Virginia Cherrill) and mistakes him for a millionaire. Though this Depression-era smash was made after the advent of sound, Chaplin remained steadfast in his love for the expressive beauty of the pre-talkie form. The result was the epitome of his art and the crowning achievement of silent comedy.

Special Features :
New digital restoration from a 4K film transfer, with uncompressed monaural soundtrack
New audio commentary by Charlie Chaplin biographer Jeffrey Vance
Chaplin Today: ""City Lights"", a 2003 documentary on the film, featuring Aardman Animations cofounder Peter Lord
Chaplin Studios: Creative Freedom by Design, a new interview program featuring visual effects expert Craig Barron
Archival footage from the production of City Lights, including film from the set, with audio commentary by Chaplin historian Hooman Mehran; a costume test; a rehearsal; and a complete scene not used in the film
Excerpt from Chaplinâ€™s short film The Champion (1915), along with footage of the director with boxing stars at Chaplin Studios in 1918
Trailers
Plus: A booklet featuring an essay by critic Gary Giddins and a 1966 interview with Chaplin

Electric.Neon.lamp : How to Disappoint Your Parents (CD ...