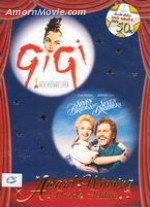 Gigi
A home, a motorcar, servants, the latest fashions: the most eligible and most finicky bachelor (Louis Jourdan) in Paris offers them all to Gigi (Leslie Caron). But she, who's gone from girlish gawkishness to cultured glamour before our eyes, yearns for that wonderful something money can't buy.

Seven Brides For Seven Brothers
Things are different for the Pontipee men now that big brother Adam's fetched a bride and brought her totheir cabin. Indeed, the unwed brothers are so inspired they raid the town and carry off brides of their own!

Like a favorite flannel shirt, everything fits right in this rugged whoop-for-joy directed by Stanley Donen, choreographed by Michael Kidd and featuring an exhilarating Genede Paul/ Johnny Mercer score that won an A Cademy Award. Jane Powell and Howard Keel star, supported by a cast of buckskinned dancers and petticoated danseuses. And what steppin'! The Barnraising sequence alone-back-flipping, plank-leaping athleticism-leaves a daylong smile. "Bless Yore Beautiful Hide," all you brides and brothers!