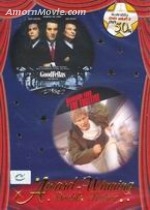 GoodFellas-คนดีเหยียบฟ้า
When Academy Awardฎ winners Martin Scorsese and Robert De Niro reunited on GoodFellas, the result was one of the most powerful crime movies ever. From the true-life bestseller by Nicholas Pileggi and backed by a dynamic pop/rock oldies soundtrack, GoodFellas was named 1990's best film by the New York, Lo Angeles and National Society of Film Critics. DeNiro's Raging Bull co-star Joe Pesci walked off with the Best Supporting Actor Oscarฎ as a too-volatile tough guy, Ray Liotta, Lorraine Bracco, and Paul Sorvino give electrifying performances within an incredible ensemble. Named among the American Film Institute's Top-100 American Films, GoodFellas explores the hoodlum underworld like no other movie.

The Fugitive-เดอะ ฟูจิทีฟ ขึ้นทำเนียบจับตาย
Harrison Ford and Tommy Lee Jones race through this breathless manhunt movie inspired by one classic TV series and which in turn inspired yet another. Ford is prison escapee Dr. Richard Kimble, a Chicago surgeon falsely convicted of killing his wife and determined to prove his innocence by leading his pursuers to the one-armed man who committed the crime. Jones (the 1993 Academy Award, Golden Globe and Los Angeles Film Critics Award winner as Best Supporting Actor) is Sam Gerard, an unrelenting bloodhound of a U.S. marshal. They are hunted and hunter. And as directed by Andrew Davis (Under Siege), their nonstop chast has one exhilarating speed: all-out.

Bodyslam : Believe (MADE IN JAPAN) (CD)(เพลงไทย)

Various Artists : BACK TO THE DOJO CITY (CD)(เพลงไทย)