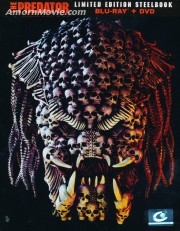 Transformers
The Autobots and the Decepticons have been at war for a long time, both trying to claim possession of the powerful Allspark Cube. The Decepticons want it to rule the galaxy and the Autobots want to prevent this at all costs. It soon becomes clear that the Allspark is on Earth, and the one person who inadvertently knows the location is Sam Witwicky. The Autobots, led by Optimus Prime, now have a new agenda: to protect Sam and to retrieve the Allspark before the evil Megatron and his Decepticons can obtain it.
Transformers 2: Revenge Of The Fallen
The battle for Earth continues in this action-packed blockbuster from director Michael Bay and executive producer Steven Spielberg. When college-bound Sam Witwicky learns the truth about the ancient origins of the Transformer robots, he must accept his destiny and join Optimus Prime and Bumblebee in their epic battle against the Decepticons, who have returned stronger than ever with a plan to destroy our world.

Transformers 3: Dark Of The Moon
A mysterious event from Earth's past threatens to ignite a war so big that the Transformers alone will not be able to save the planet. Sam Witwicky and the Autobots must fight against the darkness to defend our world from the Decepticons' all-consuming evil in this smash hit from director Michael Bay and executive producer Steven Spielberg.

Transformers 4: Age Of Extinction
After the battle between the Autobots and Decepticons that leveled Chicago, humanity thinks that all alien robots are a threat. So Harold Attinger, a CIA agent, establishes a unit whose sole purpose is to hunt down all of them. But the government is being helped by another alien robot who is searching exclusively for Optimus Prime...

Transformers 5: The Last Knight
Humans and Transformers are at war, Optimus Prime is gone. The key to saving our future lies buried in the secrets of the past, in the hidden history of Transformers on Earth. Saving our world falls upon the shoulders of an unlikely alliance: Cade Yeager; Bumblebee; an English Lord; and an Oxford Professor. There comes a moment in everyone’s life when we are called upon to make a difference. In Transformers: The Last Knight, the hunted will become heroes. Heroes will become villains. Only one world will survive: theirs, or ours.